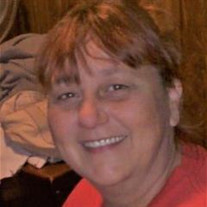 Tina M. Tunis, age 54, of Medaryville, Indiana passed away Monday, January 28, 2019 at Franciscan Hospital, Lafayette, Indiana. Tina was born on September 1, 1964, in Logansport, Indiana, the daughter of Bill Frederick and Patricia (Hayden) Frederick and was raised in DeMotte, Indiana. A resident of Medaryville since 2017, Tina had lived in the surrounding counties for several years. She was self employed as an in-home caregiver. Tina enjoyed being with her family and especially the time spent with her grandchildren. She is survived by her three children, Joshua (Tiffany) Tunis of Romney, Indiana, Jodi Tunis of San Pierre, Indiana and Jaime (Lindsey) Snodgrass of Oxford, Indiana; six grandchildren, Jordan Tunis, Katie Cotner, Jacob Tunis, Alivia Elkins, Brody Beiswanger and Joy Tunis; her mother Patricia Frederick of Monticello, Indiana, her father Bill Frederick of Wisconsin, and her siblings, Sherry (David) Risner of DeMotte, Indiana, Rod Frederick of Monticello, Indiana and Chris (Terry) Ferrell of Kouts, Indiana, along with many nieces and nephews and her former husband and father of her children, Charlie Tunis of Knox, Indiana. Tina was preceded in death by a brother, Steve Frederick. Friends will be received at Integrity Funeral Service and Cremation, 352 E. South Street, Wheatfield, Indiana on Friday, February 1, 2019 from 11:00 a.m. to 1:00 p.m. with cremation to follow. Memorials may be made to the family.

The family of Tina M. Tunis created this Life Tributes page to make it easy to share your memories.

Send flowers to the Tunis family.