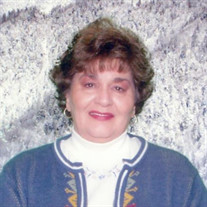 Earline Beatrice Soderstrom, age 87, of DeMotte, passed away Friday, October 23, 2020 at George Ade Memorial Health Center in Brook, Indiana. She was born August 30, 1933, in Detroit, MI, the daughter of Earl and Dorothy (Jones) Johnson. Earline married Stanley Soderstrom in 1971, in Lowell. They celebrated 32 years of marriage before he passed in 2002. She spent much of her life as a homemaker but had previously worked as a terminal manager for Carry Transit in Vaser, MI. Earline was a former member of First Church and attended First Baptist Church of DeMotte. She was a member of the American Legion Auxiliary Post 440 where she helped with membership, fish fries, and visiting the Indiana Veteran’s Home in Lafayette. Earline also, volunteered many hours at the Oak Grove Christian Retirement for many years. She also taught art & painting at the Fase Senior Center. Earline is survived by her children: Valerie Fusco of Missouri; Deborah (Cecil) Meadows of Lake Village, IN; Douglas Cohen of Illinois; Ray (Priscilla) McCarty of Florida; Catherine (Tim) Mahone of Lake Village, IN; Al (Christine) McCarty of Wheatfield, IN; and sister, Barbara (Paul) Bladen; 27 grandchildren and several great-grandchildren. Earline is preceded in death by her parents, husband, 2 sons: David Cohen and Michael McCarty, and 2 grandchildren. Family and friends may visit at Integrity Funeral Service & Cremation, 352 E. South St. of Wheatfield on Friday, October 30, 2020 from 10:00 AM until 12:00 PM. A Funeral Service will immediately follow on Friday, October 30, 2020 at 12:00 PM with Pastor Paul Bladen officiating. Interment will follow at Holland Cemetery. Social distancing must be observed and masks must be worn at all services due to the current pandemic. Memorial contributions may be made to George Ade Memorial Health Center.

The family of Earline Beatrice Soderstrom created this Life Tributes page to make it easy to share your memories.

Send flowers to the Soderstrom family.