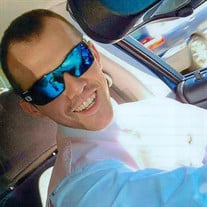 ****RESCHEDULED**** Dylan Kent Seegers, age 29, of Wheatfield, IN passed away Wednesday, January 26, 2022 at home. Dylan was born on October 28, 1992 in Rensselaer, Indiana the son of Kent and Antoinette “Toni” (Whitaker) Seegers. He was a lifetime resident of Wheatfield and graduated from KV High School, Class of 2011. Dylan was employed as a welder. He enjoyed welding and working on cars. He is survived by his son, Emmitt; parents, Kent and Toni Seegers of Wheatfield, IN; brother, Dustyn (Brittany) Seegers of DeMotte, IN; sister, Mykenzie Seegers of DeMotte, IN; maternal grandparents, Larry and Mary Lou Whitaker; paternal grandmother, Pat Seegers; nieces & nephews: Dawsyn, Rilynn, Harper and several aunts & uncles. Dylan is preceded in death by his brother, Dawsyn Seegers and paternal grandfather, Alvin Seegers. Friends and family may visit at Integrity Funeral Service of Wheatfield on Friday, February 4, 2022 from 4:00 to 7:00 PM. A funeral service will follow immediately on Friday at Integrity Funeral Service of Wheatfield at 7:00 PM with Pastor Ken Patrick officiating.

The family of Dylan Kent Seegers created this Life Tributes page to make it easy to share your memories.

Send flowers to the Seegers family.