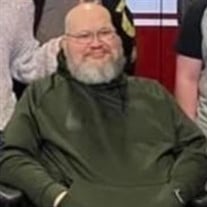 To Whom It May Concern: Let it hereby be known that Donald Thomas “Bubba” Konecki, age 50, of Wheatfield, Indiana has shuffled off this mortal coil as of February 14, 2022. He went out cussing “cancer and the horse it rode in on” (incident is currently under investigation). He is preceded in permanent retirement by his parents, Thomas Francis and Donna Mae (Zuccolo) Konecki. In life as in death, Bubba surprised his loved ones with an early start. Born at Grant Hospital in Chicago, Illinois on August 22, 1971, he blessed the lives of his adoptive parents, Thomas and Donna, by coming on the market months sooner than planned. He was a graduate of Andrean High School in Merrillville, Class of 1989. He thereafter joined the Lake Hills Volunteer Fire Department for lack of a more cohesive plan. LHFD had the foresight to put him through Emergency Medical Technician training, during which Bubba discovered a knack for making life interesting for his partners, coworkers, and patients. Three months post-EMT school, he was hired by Fagan-Miller Ambulance Service, much to the continued chagrin of management. After five years of career development, Bubba entered the paramedic program of the Methodist Hospitals of Lake County, Indiana, graduating in 1998. He went on to grace the lives of several ambulance services, while going on to earn his Critical Care Paramedic certification from the University of Maryland Baltimore College. He also provided instruction and mentorship for an entire generation of EMT’s and paramedics. Bubba recently retired after 30+ years of service in order to resist a four-year long hostile takeover by cancer. He leaves behind and entire island of Misfit Toys populated by EMS, RPG gamers, and other assorted miscreants, led by his life partner Brandy (Brook) Burch; children: Zen and Cassidy Poynter, Xylon Poynter, Isabell Burch, and Baron Burch; grandchildren, Sawyer and Raelynn; brother, Dan (Diana) Becker; cousin, Dawn Degani; nephews, Randy Degani and Zach Graykowski; furkids: Squeakers, Bernie, Lola, and Fluffy; multiple friends, their children, and friends of those children, to whom he was like a father. Please note, Mr. Konecki would like to state for the record that future paramours should administer caution in dating Ms. Burch, given the outcome of his current situation. In closing, please be advised that Mr. Konecki may require additional side work to divert his attention from taking over management of Paradise. Respectfully, Heaven’s Intake Department All services for Donald Konecki are private, family only. Integrity Funeral Service & Cremation of Wheatfield has been entrusted with the family’s wishes for cremation.

The family of Donald Thomas Konecki created this Life Tributes page to make it easy to share your memories.

To Whom It May Concern:

Let it hereby be known that Donald Thomas...

Send flowers to the Konecki family.