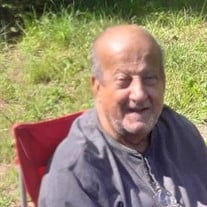 Bennie E. Leviner, Sr., age 78, of Wheatfield, Indiana passed away Tuesday, August 3, 2021 at Franciscan Health Crown Point. He was born September 2, 1942 in Hamlet, North Carolina the son of Barry and Donnie Leviner. Bennie attended public schools in Hamlet, North Carolina. He married Mary (nee Danko) on September 4, 1960 in Newburgh, New York. Bennie was self-employed as a mechanic for over 60 years. He enjoyed fishing, playing cards, going to dirt track races and spending time with his family. Bennie is survived by his loving wife of 60 years, Mary Leviner of Wheatfield, IN; children: Donna (Bill) Bare of Gary, IN; Benny Leviner, Jr. of Wheatfield, IN; grandchildren: Crystal, William (Tiffany), Angela, Heather (Danny), Benny III, Rebecca, and 10 great-grandchildren. He is also survived by his brothers: Henry, Charles, and Jimmy Leviner. He is preceded in death by his parents and 10 siblings. Bennie will be cremated and brought home to his wife. There will be no services at this time. Integrity Funeral Service & Cremation has been entrusted with the family’s wishes.

The family of Bennie E. Leviner created this Life Tributes page to make it easy to share your memories.

Send flowers to the Leviner family.